As I write this, very few details are known about the new EVE Online expansion, Odyssey. There is some key art. There are some hints about content. And the screenshots of systems on the release site. To the uninitiated the new site says basically nothing other than a lot of hints. But to lore enthusiasts, particularly travelers like myself and EVE Travel‘s Mark726, there is a lot to see here. Granted, most of it could be the art department mashing unrelated crap together (Retribution has floating spinning asteroids like the Shattered planet rocks floating with a Gallente space station, for instance, which makes no sense whatever), but for the moment let’s indulge the urge and see what we might guess if the art is indicative of the content.

So this is the key art that goes with the expansion. We can see some rock stuff on the left, a bright star in the middle, a handful of ships (3 exploration ships and a stealth bomber), a Sleeper structure component in the background, and a wrecked Apocalypse battleship. Let’s look at these components.

The “rock stuff” actually has a name – and a funny one. It’s called “Space Stonhenge w/Rotating Centre” It is only found in a handful of very interesting places (EDIT: Added the links to Forlorn Hub and Minining site).

The Unsecured Frontier Enclave Relay, a Radar site in Class 5 wormholes. Note the Sleeper structure as well. I took this pic just March 23, 2013. Click to enlarge.

The Devil’s Dig, in Otioh, The Forge. Click to enlarge. (EVE Travel)

We’ll talk a little bit about how these sites (and several others) might be related in my next post.

So how about that star? It’s awful bright, isn’t it. Well, it’s not likely to be just any star. In fact, it’s probably a Pulsar, which is a wormhole systemic effect.

“Star” from the Odyssey launch page.

The Sleeper structure is also easily identifiable, even though CCP’s artist seems to have gone somewhat to pains to hide it in the background.

So what about the ships? Well, I’m mostly willing to ignore the ones that are flying. One is a Nemesis (Gallente) stealth bomber. The others are a Magnate (Amarr) exploration frigate (could be an Anathema Covert Ops but looks too shiny to me) and a pair of Heron (Caldari) exploration frigates (again, could be a Buzzard Covert Ops). I’m going to assume that my brethren Minmatar are sitting cloaked in a Cheetah Covert Ops just off the Sleeper Enclave! I’ll speculate a bit on the potential story with these three (four?) ships in the next post as well.

So that leaves the Apocalypse wreck. In all honesty, this is the one piece that troubles me in my speculation. The wreck itself is straightforward – these are two longstanding re-used art tidbits in game, the Apocalypse Bow and the Apocalypse Stern. But how does that fit with the rest of the picture (assuming CCP did in fact make the picture story-coherent, which it has of course failed to do in the past)?

Well, there are a couple of places where you can readily find some Apoc wrecks – in the ship graveyards of Kor-Azor Prime and Mekhios (Sarum Prime III). EVE Travel has some great shots of these. 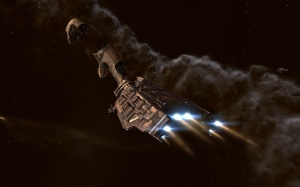 EDIT: Nathan Jameson, one of the CSM8 wormhole candidates and long-time reader, reminded me that the Amarrians were one of the first to take a full-fledged fleet into a wormhole in the lore. The fleet didn’t come back. Here’s the evidence from the Apocrypha trailer:

The Golden Fleet, along with our Apoc? Click for Apocrypha trailer.

So what does all this (maybe) mean? We’ll talk about that in the next post.