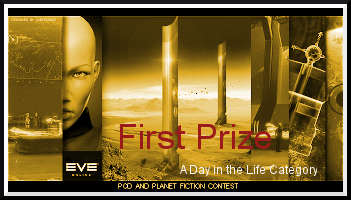 This was originally written for the Pod and Planet Fiction Contest, in the A Day in the Life category, and took first prize! All contest entries can be found here.

The scruffily-bearded man straightened his tan jacket in a half-hearted attempt to make himself look more formal. He stepped up to the check-in window as the pilot ahead of him finished, and passed through his ID card.

The customs officer on the other side took the card and slid it through a reader, taking a moment to check the pilot’s manifest. “A crate of melted nanoribbons and five crates of miscellaneous Sleeper salvage,” he read aloud. The officer paused and looked up. “Where did you get the contents of the other bulk container?”

“We find a lot of wrecks in wormhole space.”

Lieutenant Commander Anken Turu stood quietly, hands clasped behind his back as he looked out the bridge windows toward the pulsating black and orange wormhole that dominated the view. He glanced down at the control board, pleased to see green lights representing all stations.

The Captain of course was controlling the ship itself from far below him, down in the pod containment bay. But even in this age of capsule pilots, someone was needed to oversee the crew in person. In a crisis, the Captain could not leave the pod, and more often than dirtsiders might believe, the XO – in this case Turu – would be required to physically ensure compliance with the Captain’s orders.

The ship turned and began accelerating toward the wormhole’s event horizon. Turu adjusted his headset microphone and opened a channel to all decks. “Prepare to jump.”

The transition through a hole was both more and less pleasant than the jump through a stargate. In some ways it felt more organic – less like you were being shot through a cannon and more like being passed through a membrane that left you feeling slimy and coated by something – yet when you felt with your hand there was nothing there.

It was unusual to have a direct connection to Class 5 wormhole space from the empires, and Kaalakiota management was eager to take advantage of the opportunity to get Sleeper components directly rather than relying on capsuleer suppliers. The battlecruiser fleet was essentially two standard Class 3 expedition fleets – double the ships but similar composition. Fleet command was optimistic despite the risk.

Turu read the fleet command readout in front of him.

System scanning is complete, and Sleepers have been located. Make your timing precise or ships will be lost.

“Battle stations. Prepare to warp!” Turu could imagine the crew scurrying through the stations and halls of the ship. He felt the deep thrum of the shields, vibrating inward to the hull’s core as the Captain activated the reinforcing invulnerability fields. The ship shifted slightly to one side as the microwarp drive kicked in and the ship aligned. Turu took a moment to sit down and gaze out the windows around him. There were few things he found so beautiful as a massed fleet of battlecruisers flying in formation. The system’s orange sunlight gleamed off the silvery hulls.

He was pressed back into his seat as if by a giant hand as the ship leapt forward onto the warp tunnel.

Hentogaira landed amid the controlled chaos of battle. Shield maintenance drones careened madly around the field, working alongside Basilisk-class logistical support task forces. Turu suppressed a shudder as he saw the four Sleeper battleships come into view. Fighting them was not like battling rogue drones, who attacked mindlessly and with little coordination. Sleeper drones were unpredictable, vicious and tactically sound. Weapons fire began to light the darkened sky.

The target data panel before him lit partially red. Thankfully, it was just the Sleeper frigates. They would make his life interesting for a brief time but would do little damage thanks to the Basilisks.

Right on cue, the drones’ warp scramblers engaged Hentogaira, ensuring she could not warp away, and taking away the speed of the microwarp drive as well. With the exception of those details, however, all ship’s status indicators remained green. The shields were holding. The Captain was pounding away with missiles at one of the Sleeper battleships nearby, ignoring the entangling frigates like so many bothersome but ineffectual insects.

Out the window, Turu’s eye caught the explosive flaming decompression of one of the Sleeper battleships. Maybe this would be little more difficult than a Class 3 after all, Turu thought.

He was so busy scanning indicators and windows that he almost missed the message.

Watch your directional scan for ships and report.

Fleet command must have caught a whiff of something. Probably another small ship in the system.

On another screen, he could see that the Captain was already acting on the order. The scan showed nothing. There was another brief flash out the bridge window from the explosion of a second Sleeper battleship drone.

Without warning, the target screen lit up entirely red. Turu barely had time to yell out, “Incoming!” before the impact of the Sleeper battleship weapons nearly knocked him from his chair. Warp drive offline and moving at a crawl, Hentogaira was a sitting duck. The Basilisks and drones swarmed toward them, filling the bridge view as they orbited to save the ship from having her shields dissolved in a cloud of plasmatic fire.

Turu allowed himself a brief smile. The ship was taking all of the fire and the shields were holding. The shield indicator maintained yellow, but the rest of the panel was green.

The ship lurched sideways, turned suddenly from her previous alignment.

This could only mean one thing – the Captain knew something the rest of the crew didn’t. Turu’s eyes flipped to the directional scanner.

Heavy interdictors. It would take an awful ballsy group to come after a fleet this size while engaged with Sleepers. The Captain was trying to align out and prepare to take on the new arrivals.

The sky lit brilliant blue, flashes of electricity arcing across warp interdiction bubbles with the Devoter-class ships at their centers. The bubbles enveloped the entire Kaalakiota fleet, preventing warp drive activation for everyone inside them – the ships on both sides were now committed. Turu watched as Hentogaira’s missile batteries were redirected to target the nearest interdictor.

A return glance to the scanner screen told him why immediately.

Two carriers and three dreadnaughts. The only chance of escape now was high speed and getting outside the bubbles.

What didn’t make sense at first was why the gigantic capital ships landed on the field so far away, leaving the Kaalakiota ships between them and the Sleepers.

The hulking wreckage of the Sleeper station shuddered and appeared to shatter into pieces, spewing its contents like a disturbed hive as more than 30 additional Sleeper vessels, two thirds of them battleship-class, launched and hurtled toward the beleaguered Kaalakiota fleet.

Turu shouted into his mic. “All hands to emergency stations! Go go go!”

Out the window, a fleet of Loki-class strategic cruisers seemed to materialize from nowhere as they decloaked and threw webifiers on every ship in the fleet, rendering the Kaalakiota ships nearly unable to move.

Turu knew even a miracle could not save them now.

One Basilisk exploded, then the next, as the Sleepers focused fire. Alarm klaxons howled and the status board began to go red as Hentogaira’s shields began to buckle. His eyes locked on the status panel. 5 kilometers to the edge of the bubble. 4 kilometers. 3 kilometers.

A red light on the targeting panel suddenly caught his eye.

The frigate-sized titanium sphere fired from the Moros tore through the last remnants of Hentogaira’s shields, shattering her armor and bursting open inside the hull of the ship. Superheated antimatter from the core of the shell exploded through the Drake’s delicate innards, blinking anything it touched into immediate nonexistence and setting plasmatic fire to everything else.

“We find a lot of wrecks in wormhole space.”

The customs officer’s skepticism was palpable. “Kaalakiota lost a lot of battlecruisers with equipment matching this description. Rumor is a bunch of wormhole capsuleer pirates killed them.”

The bearded man frowned. “Take a good look, officer. It’s all got Sleeper damage on it. And you know as well as I do that CONCORD regulations say salvage belongs to the salvager.”

The two looked at each other through the glass for a long moment before the officer looked down at the manifest readout again.

He passed the ID card back under the glass. “Market bay 14-A-2, sir. Enjoy your visit.”