A Sort of Homecoming (Blog Banter 39)

“Some say a man’s home is his castle. For others it is wherever they lay their hat. The concept is just as nebulous in the New Eden sandbox. In EVE Online, what does the concept of “home” mean to you?”

There is a strange sort of romance in the nomadic life. When I started the character of Rhavas, and indeed this blog, what I really wanted him to be was a Thukker – a nomad of the spacelanes, and in the original concept (before I understood game mechanics), a smuggler. A loner. In the end, the closest I could pick in-game was a Vherokior Drifter.

It is perhaps a romantic notion to me because, as a player, I realize that I am a homebody to the core. I settle in, and I like the place where I am. I truly begin to feel a place in EVE is home, and build a connection to it.

Instead of truly feeling the way of the nomad, I have defined “home” in many ways.

Hadaugago is where I spent the tutorial. I still remember with trepidation my first jump through that gate in my shiny new Thrasher.

On the other side of that gate was Eystur, the perfect home for a small-time hauler. As an independent, this is what I did. Too bored by mining and missioning and too paranoid to join a corp, I hauled for ISK, eventually adding PI to my slate. Eystur is positioned one jump from Hek, but importantly a jump into Heimatar, so it is simple to grab prices between two regions and two trade hubs (Hek and Rens). I also attempted some small-time manufacturing in the stations there, which were less overloaded than hub stations. It is also very well positioned for easy runs to many places where corporations prefer to buy items at a reasonable upcharge … from EVE University in Aldrat to the pirate corps who occasionally stick their nose out to buy something in Emolgranlan.

The Homes of Rhavas’ Heart

As readers of this blog know, Rhavas is a student of the shattered planets, and the lore behind them. There are three places that fit this definition of a potential home – none of which worked out but all places he would wish he truly lived.

Where I Hang My Guns 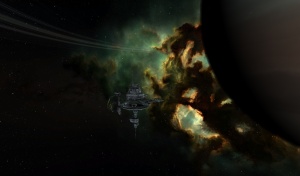 I think the most common conception of “home” for an EVE player, however, is his corporation’s base of operations, especially if that corp lives in the same place for many months. I’ve generally picked corps that stayed in one place, as befits me (the player).

Next: A Home That Roams?

As I look toward a potential return, I am again torn by the implications of the potential home I might have. The wanderer in Rhavas the character sees no threat in the station lockouts of Faction War – but as the player I see a painful level of inconvenience. I the player know too well how easy life can be stationed in highsec, but near to lowsec and nullsec pipes for income and fight opportunities.

But in the end, we are both fascinated by the potential of a home that stays in one place while the opportunities for profit and war shift, open and close – around it.

This entry was posted in Blog Banters, Commentary and tagged Community, EVE Online. Bookmark the permalink.

6 Responses to A Sort of Homecoming (Blog Banter 39)