Andy Warhol once famously said that “everyone will be world-famous for 15 minutes.” I think November 2011 has been mine within Eve. Better still, the best part is still to come, with the release of Crucible.

I can honestly say at the beginning of November I had no idea what was in store, but it’s been a remarkable month.

So am I just putting all this here to brag? No – I have a few points.

So … the month in review, and the people I have to thank for it:

After several days exploring the SiSi test server, I published this post on November 7, intended as long-form commentary for CCP and some of my favorite shots. Thanks to CCP, particulary CCP Manifest, for choosing this post for CCP’s Facebook page and News Email. And of course, to Team Tri-Lambda at CCP, aka the art department. Let me show you what exactly this does to a typical Eve blog’s traffic.

Let’s look at that in comparison to other posts. The blog is about 18 months old, and the home page has gotten less than 1/3 the number of hits in that time than Nebulized got in three weeks. I plug the Shattered Planets Datacore every chance I get – it is a separate section of the site, published about 8 months ago. My next closest actual post, CONCORD’s Fine Print, published 9 months ago, has gotten 2% of the hits that Nebulized has.

Number one with a bullet

I have entered various contests over the last two years, but only when I entered Silver Night’s annual contest back in March with Short Circuit did I feel like I was going up against the kind of competition I saw in the two I entered late this month. I suggest to any readers who have not already done so that you read all the entries to Mord Fiddle’s “Lives in Lowsec” contest and in Darth Skorpius’ “Write My Bio” contest.

The Tide Pool won first place in Mord’s contest, and Ward of the State won third place in Skorp’s contest. That also means I made more in fiction contest prizes this month than I did in game activities, and broke 1 billion ISK in my wallet for the first time ever!

With thanks to both contest runners, my corpmates in The Corporation of Noble Sentiments [TORAH], and our erstwhile adversaries General Tso’s Alliance.

I Am No Ripard Teg – Personal Posting Records

For those of you who are not familiar with him, Ripard Teg has earned a reputation in the blogging community as a “roboblogger from the future” – he puts out so many posts at such a level of quality no one can keep up. We all believe he is secretly Watson posting Eve commentary.

This will be a record 9th post for me in a single month, and a record three of those (The Tide Pool, The Happy Place and Eve’s Ugliest Cruiser), plus an edit and prize handout for Eve’s Ugliest Noobship were written on the same day, November 21, on a day I had off from work. All three were somewhat in depth and radically different from each other, but it was the most I can imagine doing at one sitting. I have no idea how Ripard Teg does it.

I don’t get a lot of online time, so I value each roam I get and each kill I get. The whipped cream on my Happy November sundae is my highest killcount ever. Sure, 20 kills isn’t that much, but it’s a lot for me. It makes the loss of my poor Rapier worth it. Many thanks to Sto Lo and Dorn Zask for all they do to get roams going and lead the corp. Also thanks to my late-night null buddies Zerolis and Paascali.

Your Name in Lights

But long after all the above has faded, CCP Dropbear is the one I’ll have to thank for people some day saying, “Who’s Rhavas?”

As regular readers may know, I left Eve, but then came back when I heard CCP Dropbear had launched, as Hilen Tukoss in-game, the Arek’Jaalan Initiative. Since then, a handful of players have been busting their ass effectively working as unpaid volunteers for CCP’s content team, writing up wiki articles on in-character knowledge. My primary contributions toward this effort are unsurprisingly those around my exploratory efforts detailed on this blog. Specifically: Shattered Planets, Project Tesseract and Project Catapult. I’ve also helped out Mark726 of Eve Travel on his baby, Project Compass, and Helen Ohmiras on her Project Slipstream.

I’m off on a business trip for most of the week, and sadly will miss the launch of Crucible. Therefore I suspect that CCP Dropbear, to say nothing of Mark726 and Freebooted/Tech4News, will scoop me IC. I have a draft written that I hope to publish next week with the full story.

But meanwhile, here is the cherry on the sundae of my November – a small preview. Much more to come later this week – from me and the co-conspirators noted below. 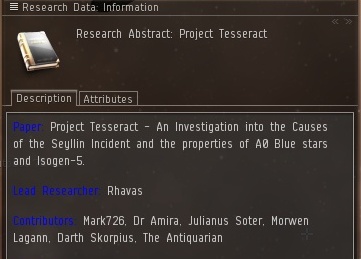 Yep, this is an actual in-game object

Have a great week, thanks for reading, and enjoy the launch of Crucible.

This entry was posted in Commentary and tagged Arek'Jaalan, Community, EVE Online. Bookmark the permalink.