Shattered – Part 8: The Silence of the Grave

The trip out from empire into the depths of nullsec space had been quiet, and the return home had proven even more so – a brooding, thoughtful quiet. 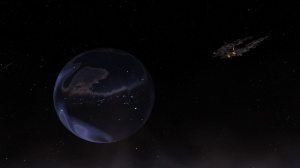 One of many bubbles awaiting the unwary in Curse. Click to enlarge.

It seemed a very long time ago that Rhavas had taken his first nullsec roam. After so many long forays in search of the shattered worlds, caution had become second nature. He jumped to a planet, rescanned, found a bubble near the gate, warped in at range, skirted it and proceeded unmolested. Practice did indeed make perfect – or at least less nerve-wracking.

The two shattered world sites on the eastern side of the cluster, SL-YBS and Z8-81T, were a long but manageable single trip. His crew had become hardened to the extreme distances that were involved in the trips to these far-flung sites, but even they occasionally came unraveled – warp-sick, heartsick from the parade of endless destruction and homesick from the unrelenting flight schedule and regular near-death experiences.

Rhavas, in contrast, found himself ever more detached from his subject matter. The shattered worlds had gone from shock at the extent of devastation to speculative theorizing to scientific investigation in his mind. It was now simply a puzzle he felt compelled to assemble that he wasn’t sure was even possible to solve.

He banked the Covert Ops frigate over and jumped through the gate, leaving the bubble for someone less cautious. 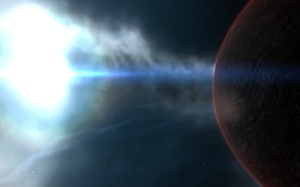 I had hoped somehow to find the remains of the ship of my father’s people, somewhere to pay my respects to those of the Thukker who died here. There was very little to go on in our search – just two log entries from the Seyllin Report:

10-03-111 0952 – A Thukker caravan is reported missing in the Great Wildlands. In a closed meeting with Sanmatar Shakor, tribe leaders state that its last known checkpoint was a waypoint located in the SL-YBS system, and request Republic assistance in searching for the missing fleet.

Sanmatar Shakor [announced] that the Thukker Caravan which was reported missing earlier had been completely destroyed by another similar main sequence event, bringing the total up to four recorded events (Seyllin, 3HQ-C, 35-RK9 and SL-YBS).

SL-YBS I as seen from the ice field. Click to enlarge.

Unfortunately, we were to be disappointed in our hunt for clear links back to these entries in the report. The obvious conclusion is that the caravan was utterly incinerated in the burst of energy from the system’s sun and nothing remains to be found.

The system also is home to an ice field near the shattered planet. At one point I found ice fields unusual, but my time studying these planets and the stars they circle has given me a new perspective. While I have not done in-depth statistical analysis, anecdotal evidence indicates that ice fields are remarkably likely to be in systems with blue stars, whether they be A0 or O1. 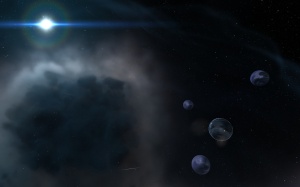 The system was remarkably quiet for our visit – only a handful of ships passed through during the hours we spent there. We did find a corporate starbase that clearly was expecting company – they had three warp bubbles up to defend against incoming attack. But there was no movement even there to indicate life and activity.

In the end, there is little in SL-YBS other than, perhaps appropriately, the silence of the grave. That will have to be respect enough. 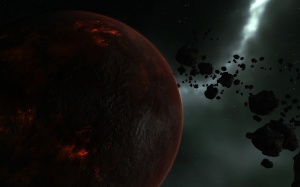 Of all the systems I have visited, Z8-81T least fits the conspiracy theories that I have laid out in previous log entries. I expect to find signs of the Amarr, the Sansha, the Blood Raiders, the Sisters of Eve, the Sleepers, rogue drones, the Jove – even the Intaki, and some Gallente corporations when exploring these places.

None of them are to be found in any way in Z8-81T. The shattered planet and blue star are here, as in all the others – but cloistered away in hidden deadspace pockets here are the Angels I have battled for most of my life as a capsuleer in the Republic. I have little or no connection of the Angels to this mystery other than the tenuous links of their presence in this system and the old rumors of their connections back to Jove technology.

Machariels at the Angel Prison Gate. Click to enlarge.

The Angels have a large deadspace zone, a prison according to the beacon messages, cordoned off by Machariel-class battleships and locked acceleration gates. While I was able to get close enough to gather visual intel, I did not dare to attempt to activate the gate given the heavy security. I would be very interested to see who the Angels find worth holding prisoner, given their own criminal nature.

The planet itself is one of the more active that we have seen in our journey, and on the larger side but still significantly smaller than 3HQC-6 I. Other than the Angel site and the planet itself, there was nothing of interest in the system, not even a wormhole.

As my investigation drags on, I admit that it is beginning to wear me down. I have found much, but yet have found nothing. The last shattered planet to visit is T-IPZB in Delve – I have left it for last because I believe that it was where the event started, and I hope it is where I will find some answers.

3 Responses to Shattered – Part 8: The Silence of the Grave